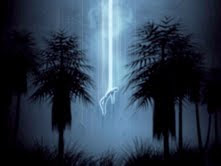 This Belgian case, which has been very thoroughly investigated, occurred at Vilvorde, an industrial town in Flanders, some 12 kilometers to the north-northeast of Brussels

The eyewitness made the sighting from the ground floor of his home, a modes house facing on to the street and surrounded by dividing walls. Behind the house lies a small garden measuring about 72 square meters and with three, high, whitewashed walls. Beyond the back wall there is a large property owned by a convent of the Ursuline Sisters. The witness has asked that his identity be kept confidential.

The sighting was in mid-December of 1973. The happening came only a few days after an interesting near landing case at Boondael already reported in Inforespace, Number 14. The weather was very cold at the time, though there was no longer any snow, and a strong wind was blowing over the region.

The witness, Monsieur 'V.M." was aged 28 at the time. He and his wife were in bed and asleep. At 2:00 a.m. he arose to go to the toilet, which is in a small outer yard adjoining the kitchen. In order not to disturb his wife he made his way in the dark, using a hand-torch. (flashlight) Reaching the kitchen, he heard, coming from the outside, a sound like that of a shovel striking the ground, and filtering in through the gap at the left-hand side of the kitchen window curtain, he perceived a greenish light. He compares it with the diffused glow of an aquarium light. Knowing that his garden would normally be plunged in total darkness at such an hour, and puzzled by the noise, he went to the window and parted the curtain, to behold an astonishing sight. At the other end of the little garden there was a small being about 1 meter 10 centimeters in height and wearing a shining one-piece suit emitting a greenish luminosity. The entity's back was toward him in three-quarter profile. He was of medium build, and his head, arms, and legs normal in appearance. His green uniform was very bright and sparkling and the witness compared it with the material of the upholstery of certain "buggy" types of cars (polyester tinged with metallic particles). The entity's head was protected by a transparent globular helmet, and from the rear of it a tube led down to join a sort of rectangular "haversack" on his back. The "Haversack" covered his back roughly from the waist upward to the level of the shoulder blades -- should indeed a humanoid possess such things as shoulder blades. All this apparatus was of exactly the same appearance as the rest of the uniform.

The clothing appeared to be entirely without stitching, with no buttons, no fasteners, or pockets. The witness noticed a belt, and when the entity moved about, he was able to see that, on his abdomen, at waist level, he had a small bright red "square box," luminous and sparkling. The belt was about 3 - 4 centimeters wide and the small "box" was about 8 meters long and some 3 or 4 centimeters wide (we must emphasize that these measurements are very approximate). The trousers, the lower parts of which were slightly baggy, were thrust into small, close-fitting boots which had the same appearance as the rest of the uniform. No detailed features of the entity were visible. His hands were of the same shape as ours, but with smaller proportions. They were gloved and the sleeves of his suit were tight-fitting at the wrists and, like the bottoms of the trousers, slightly puffed out. Seen from the rear, the head looked round and black, and V.M. thought the entity must have short hair. A luminous halo surrounded him from head to foot, and also partly illuminated the ground and the wall on his left. No sound was emitted by the entity and the witness could detect no respiratory movement in him.

In his hands he was holding an instrument closely resembling a vacuum cleaner, or a mine detector, which he was slowly passing to and fro over a heap of brick-bats that the witness had gathered together at the bottom of the garden a few days previously. The instrument had a long shaft bent at one end to form a handle, with a small rectangular box below the handle. The "detector" itself consisted of a thick rectangular plate with the frontal edge leveled. The other side, to the rear, consisted of a cylinder with about the same diameter as the thickness of the plate. The shaft was connected to the instrument between these two areas. In color the instrument was identical with the humanoid's uniform. Witness detected no sound or light emission from it.

The witness noticed that the small personage seemed to have difficulty in getting about. He moved slowly, with a waddle, and bending his knees slightly. His gait seemed particularly heavy. It was at this point that V.M. made use of his torch, flashing it twice toward the end of the garden. Thereupon the humanoid turned round, and it seemed as though his neck must not be movable, for he did not simply turn his head but slewed the whole body around. Then for the first time, the witness caught sight of the dark face of the strange visitor. Neither nose nor mouth was visible. All that he could distinguish was a pair of somewhat pointed ears. The eyes, oval and yellow in color, were particularly large, very bright, and surrounded by a green rim. Upon the iris part of the yes the witness noticed small black and red veinlets. the pupil was black, and slightly oval. At times lids came down over the yes and simultaneously the face became completely dark for a few moments. When the eyes were open, these two upper lids were invisible. One might liken them to a kind of black blinds or shutters, which progressively masked the eyes as they descended.

As he now stood there, eying the witness face-to-face and holding his "detector" in his left hand, the ufonaut seemed to answer the luminous signals from the flashlight by raising his hand and giving the "V" sign with the index and second fingers, after which he turned away again and, with his characteristic gait and gently swinging his arms, walked off toward the back wall.

Arrived at the wall, the creature placed one foot flat against it and the, without any hesitation, did likewise with the second foot and walked straight up the wall with no change of gait except that now he was holding his legs stiff. During this astonishing progression the personage still continued with the same arm movements and continued to hold his instrument in the same position as when he was on the ground. Reaching the top of the wall, which was about 3 meters high, he executed a complete arc of a circle as he became erect again and then swung down and forward to descend the other face of the wall in this same surprising fashion.

Four minutes or so after this unwonted exploit, a, vivid halo of white light appeared beyond the wall and the witness heard a faintly perceptible chirring sound somewhat muffled by the wind. (Let us also bear in mind that throughout the sighting the witness was behind a closed window.) Then, rising very slowly, a round object began to appear, hardly a few meters distant beyond the wall.

After rising a short way, the "machine" halted and remained there stationary for about four minutes, still emitting the same chirring noise comparable to the noise of a cricket rubbing its wingcases together, and with about the same degree of loudness. The diameter of the object might have been about 5 meters (this estimate being based on the width of the witness's garden). Its upper half was orange-colored, phosphorescent, and surmounted in the center by a transparent cupola emitting a greenish light. The color of the lower half was a dark claret and on this darker area, showing up very sharply, were three lights disposed horizontally, the one on the left as seen by the witness being blue, the middle one yellow, and the right-hand-side one red. These three lights flashed on three times in sequence.

On the periphery of the machine, the witness noticed what looked like showers of sparks resembling the sparks of a cigarette lighter. They were located at the juncture between the dark underpart and the bright upper-part of the machine, that is to say, at the part where the craft's circumference was greatest. The sparks seemed to be thrown outward by a rotary movement, although the object did not seem to be rotating on its own axis.

Beneath the transparent dome, V.M. could see the humanoid, bathed in a bluey-green light. No other detail in the cabin was visible to him.

Immediately below the cupola, the witness noticed more-over an emblem outlined upon the orange portion of the craft. It consisted of a black circle traversed diagonally by a yellow lightning flash of a brighter shade than the phosphorescent orange area.

The UFO now rose again vertically about 20 meters, still retaining its horizontal position, and began to rock gently to and fro. The showers of sparks were still coming out all around it. The the chirring sound grew louder and because a sort of hiss, and the craft gathered speed and shot straight up into the sky, leaving behind it a luminous trail. In a few seconds it was no more than a tiny point of light lost among the stars.

At no time during this extraordinary encounter does the witness claim to have felt any fear and he says he experienced no hostile reaction against the humanoid. It must like-wise be mentioned that throughout the whole close encounter V.M. received no verbal of "telepathic" message. After the machine had vanished he does not seem to have been greatly shaken by all that he had seen, for he sat down at the kitchen table and prepared himself a light snack, after which he very normally returned to bed and peacefully went off to sleep again. In addition to his wife, a cousin of his was also living in the apartment. During the sighting he thought of calling the cousin, but in the end, we don't know why, he did not do so.

Next morning he arose, as on every other day, without any complaints about headache or any sort of malaise, and in the course of the morning he went out to inspect his garden. He found nothing particular there: seemingly nothing had vanished and he found no impressions on the ground and no marks or scratches on the wall. The humanoid had not even left his footprints.
_________
From the pages of Flying Saucer Review
Posted by P. Urial at 7:11 AM