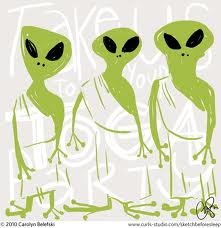 An annual festival took place in the precincts of the shrine where the young white man used to take a walk holding the boy, Warabe Amanaka, aged 5. The five-year old boy went out with his family to enjoy the festival, wearing a yukata (informal Japanese summer kimono) and putting on geta (Japanese wooden clogs). After the ceremony ended in a lively way at nine o’clock at night, Warabe returned home and went to bed.
While he was lying in bed not quite falling asleep, he felt again someone calling him gently, “Come out, my boy!” No sooner had he heard the voice in his mind than he woke up and cheerfully went out in his yukata. The man was standing there with a smile as usual.
“Uncle” (as Warabe called the stranger) was about 200 centimeters tall with hair cut short like that of a young girl. His complexion was white like a Caucasian, having clear-cut features and large eyes. In addition, his skin was so smooth that the boy found no traces of a mustache or beard. “Uncle” was wearing the usual long white dress and white shoes. He said, “Come along with me, my boy.” Warabe answered with real delight, “All right,” and walked with him at ease. They walked continuously passing by the shrine and the graves until they came to a large field. Surprisingly enough, there was a large round object showing its dim outline in the darkness. It was about 40 meters across, but the boy could not see any additional detail. “Uncle” took the boy into the large object through a door. When entering, Warabe found that there were five men waiting for them. They were also tall and wore their hair bobbed similar to that of “Uncle” except for one man.
This man was rather short, wearing a ski-type overall of light brown color with a wide waist belt and brown shoes. His long blond hair hung about his shoulders. In addition to being good-looking, his complexion was much like a Japanese. At first Warabe thought he was a woman, but later he knew that the person was a man. All the crew was very friendly and kind and received the little boy warmly. They were ordinary persons without any eccentricity, so Warabe could make himself at home there. The crew except for one wore a kind of poncho-style long white dress having no sleeves. Here the boy was also changed into a small poncho-style dress designed for a child, and was given white sandals. “Uncle” changed his clothes especially for the unearthly flight, too. Then he seated the boy in an armchair and helped to fasten the boy’s seat belt. After having made preparations for a journey, the boy’s friend said, “We are going to take you wherever you want to go.” This offer delighted the boy, so he answered without hesitation, “I want to see elephants and whales!”
“All right, we will go to where the elephants and whales are.” “Uncle” was quite ready to comply with his request. The object was one of those so-called flying saucers. It took off noiselessly and began to fly into the dark sky. On the wall were large elliptical windows. The round floor was large and over 15 meters in diameter. The illumination was too weak to show the detail of the room. In the middle of the round floor was a huge, white translucent globe which was 2 meters across. The color tone of the interior including the floor, wall and ceiling was all in a general color scheme of milk white.
After flying for a while, Warabe was surprised to see the sun rising above the horizon again. He supposes now that this was because the vehicle was flying at a very high altitude. In the meantime, the boy saw the sea below, and they flew for more than an hour when “Uncle” finally said, “Boy, some whales are swimming. Look down at them!”
The young man held Warabe and walked to the nearest window to watch the whales swimming and spouting water. However, since the flying saucer was at a high altitude at the time, the whales were dwarfed. So the little boy complained, “I thought whales were very big, but now they are rather small. I want to see big ones.”
“Uncle” agreed to the boy’s proposal, “Ok, we are going down a little more.” The saucer descended very close to the surface of the sea and hovered. Warabe cried in excitement, “Wow! How big they are! Great!” The boy was truly excited with the enormous creatures he had never seen before. “Uncle” watched them pleasantly with a smile.

Then the saucer began to fly again past the ocean for a long period. This time they flew further and further over the vast desert until they finally reached the place where elephants were to be seen. Warabe is of the opinion that they had come all the way over to Africa. Looking down at the grassy plain, the boy noticed that a crowd of elephants were stomping about, raising a cloud of dust. But they were also dwarfed by the high altitude. Again Warabe was not satisfied with the sight and said, “Uncle, I want to see bigger elephants!”

The young man answered, “All right, we are going down a little more.” The saucer descended slowly and finally landed on the plain! With joyous wonder Warabe watched these gigantic animals walking and swinging their large ears and long trumps. He was very much moved by the scene, since it was the first time he had seen real elephants. Some of them seemed to have become aware of the huge saucer and looked at it. During the long flight, “Uncle” served juice one in a while, which tasted sweet and a little cold. On one occasion, one of the crew who looked like a woman gave Warabe a cup of juice, saying, “Hai, kore” (Here you are). He spoke standard Japanese, and was very tenderhearted.

The wonderful flying machine flew again and arrived in Giza this time. Through a window Warabe saw the great pyramids and the sphinx in the setting sun. He must have looked at them front ways because the saucer landed on a small hill located far ahead of the sphinx.

( A few years ago Warabe Amanaka visited Giza with his wife and confirmed the place where the saucer once landed. The hill, which was 40 or 50 meters high, was just as it was.)

It was just before five o’clock next morning when they returned to the point of departure in the suburb of Matsuyama. Warabe noticed it because he found that the clock showed five a.m. when he got home. Just before leaving the marvelous vehicle, the crew stood in a row. Then “Uncle” took a step forward, saying in behalf of them, “My boy your father is Abraham. You are Abraham’s son. You must bear it well in your mind.”
Warabe did not know the name “Abraham” at the time, but repeated the name in order not to forget it. The little boy left the saucer for his home hand in hand with “Uncle”, but both said nothing at all on the way. “Uncle” disappeared when they got to the house. The whole neighborhood had been in great confusion because the boy had been missing from his house for the night. The villagers conducted a search for the boy all through the night in vain. Therefore, his family was very surprised to see him again. His father was furious at his abrupt appearance and cried, “Where have you been?”

Warabe talked about his fantastic experience---that he saw whales in the sea as well as elephants and pyramids from flying in a large round object at night. But they did not believe in his story at all. In addition to disbelief, they laughed at him and scorned him, saying that he was talking nonsense. He was then branded by the villagers as a big liar and or just a sleep-walker.