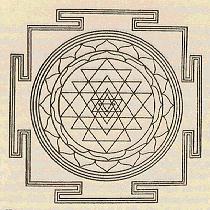 The sri yantra consists of nine interwoven isosceles triangles: four point upwards, representing Sakti, the primordial female essence of dynamic energy, and five point downwards, representing Siva, the primordial male essence of static wisdom The triangles are arranged in such a way that they produce 43 subsidiary triangles, at the centre of the smallest of which there is a big dot (known as the bindu). (George Joseph)

As you may know, Eastern Oregon was Gifted with the Sri Yantra Mandala Formation in August 1990.  It arrived in a dry wilderness lake bed east of Steens Mountain, and consisted of 13.3 miles of lines, each 10" wide and scored to a depth of 3 inches in the hardpan.  The graphic above is the Sri Yantra, and the Pattern discovered in the dry earth was identical in all respects.

Four jokers claimed it - the joke was that they alleged they pulled a 'garden cultivator' like a plow for over 13 miles, in an officially designated Wilderness Area, in the August desert heat - where not even cars are permitted.  They concocted the story that they hauled all their gear 3/4 mile to the site each day.  (It turned out that that was one of many discrepancies in their story, for they'd allegedly told a sergeant from he Air National Guard that their campsite was actually two miles from the Formation.)  A second  discrepancy; In their initial 'confession letter' to the newspaper they wrote that all four of them were hitched up simultaneously to pull the cultivator, but the video shows only two of them attempting to pull it.  Another one I found of interest is the apparent major exertion seen to be required to gouge a thin 1/2" deep line into the earth (as seen in the video) vs that needed to create a trench 10" wide and 3" deep - apparently without effort, according to the same video. (Editor's note:  I do not know where the video is to be found!)  (The reason the 'real' line was easy to dig out is because it was already there - they had apparently filled in the trench with the soft dirt, and hoped to give the illusion that they were digging the furrow with their plow.)  These 'variations,' as well as various others stretched my own and others' credibility well beyond believability.  One can reasonably conclude that the only creativity these four expressed was though their over-active imaginations and not through any grand desert artistry.

Interestingly, the skies above the Sri Yantra are regularly used as part of the Idaho Air National Guard's pilot training area.  According to the lieutenant pilot who first spotted the huge pattern on August 10, no pilots had reported a design-in-progress: the pattern had simply 'appeared' one day.

Various points in the purported 'documentation' which those who claimed the Sri Yantra offered were easily picked apart by researchers who subsequently visited the site.  I, too, have noted non-sequiturs and blatant manipulation in previous fraudulent 'Crop Circle documentaries,' manufactured and aired solely to convince an unknowing public that the Circle Phenomenon is not worth serious study.  I strongly urge each of  you to use critical discernment when evaluating any kind of 'evidence' presented by anyone about anything - perhaps most especially so-called 'expert' testimony - and especially as regard the Circles.

For additional information on this Sri Yantra Formation, check out Dr. James Deardorff's excellent report in the UFO Magazine, volume 6 #3, 1991 (A symbol on the Oregon Desert).

Written up by Ilyes

Much thanks to you for this important data, I trust it is alright that I bookmarked your site for further references. To get new data visit here.
I also gotten a great art and appliance of Sri Yantra on Glass--
sri yantra